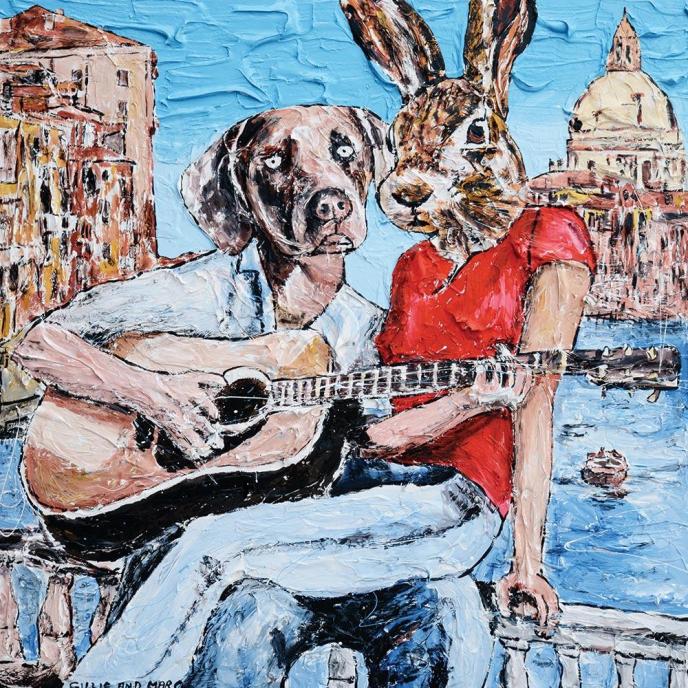 Picture: He Only Sang To Her by Gillie And Marc

He played and barked and played. Nothing else could have pleased the hare more. “Woof, woof, woof,” and he strummed a Gminor, “Woo-oo-oof,” he added dramatically on a Cmajor chord. She squealed and hissed and smiled. The gondoliere, gliding placidly along the canal, was staring at them. But he stared so hard that his gondola boat went crushing against and into a wooden door right above the edge of the water. His body was hurtled inside the aquamarine building, with a fair dose of splinters pierced into his limbs. The young woman in her summer dress, who was reluctantly mopping the floor, screamed. Deprived of breath, he gestured a sort of apology with his hands. She cried even stronger and dashed toward him, brandishing her wet, dirty mop. His eyes, closed fast and sheltered behind splintered hands,  awaited the inevitable. A moment later, he dared to peer beyond his fingers. The woman was paralyzed, gawking at the scene outside the remnanst of her door: “Woof, woo-oo-oof-oof!” She then turned her gaze back to the hapless gondolier as if to ask what’s going on there by the railing, but he just shook his head. The dog kept playing for the hare, unaware, or maybe unconcerned, about the incident on the other side of the canal.

Venice was gleaming on that day of October. A very few tourists around; the locals ambling and going on errands – and of course a dog singing to a hare by the side of the Canal Grande. The woman, after her steam had blown off, helped the gondolier up. She lead him to the kitchen and removed most of the bloody splinters, one by one. After the ordeal, she pointed at the moca – a beloved Italian coffee maker – and the gondolier nodded, his face still petrified in a painful grimace. The smell of home-made coffee matched with the woofing serenade coming through the caved-in door. While sipping their brew, they were suddenly so attentive to the music, they could somehow, somewhat – maybe? – understand the deep meaning of that song. At the climax of their concentration, the music stopped. The sound of a motorboat droned by, a seagull laughed out loud, above the spacious silence of an exceptional Venice. The woman and the gondolier turned their gaze to the kitchen doorstep and, in the blink of an eye, they appeared: “W-hoof.”

So the dog and the hare, politest of all guests, sat with them. The woman made coffee once more and produced a pack of fresh pasticcini. They all enjoyed their pastry: the dog had an egg custard cannoncino, the hare a fresh fruit tart, the woman a dark chocolate-coated bignè, whereas the gondolier delved his fingers in a big, green pistachio bombolone.

Paws washed, the dog picked up his acoustic guitar and barked invitingly to the woman. She pointed her fingers at her own round face, with a big question mark abover her head. The dog barked; the hare squealed and smiled. Choiceless, the venetian girl uttered a comfortable note in her best contralto, yet the note broke down behind a cough. She blushed, and the gondolier gave her a friendly nudge. She tried again, whereas the dog began plucking a soft arpeggio in Amajor. Her opera-style voice fluttered like coloured smoke, as red as her summer dress. The hare and the gondolier could almost see it twirling in the air. Utmost delight. The song terminated on a jazzy Dmajor7, and silence ruled again.